Where oh where should I begin????? Ok, so round 6 was on Christmas Eve. Everything went well. I had the best nap at treatment thanks to the Benadryl. Christmas Day we went to my parents. We had dinner and did presents with Heather and James. James got to play Santa and pass out the gifts. It was all in all a great Christmas. A few days later, the side effects of round 6 started to emerge. In addition to the aching restless leg type pains I was anticipating, I also had incredibly painful knee and hip joint pain. I felt like I aged 60 years over night and developed arthritis! It was ridiculous! So I called my doctors office and got, what’s that? Oh you guessed it. Yet another prescription to combat the side effects of chemo. I’m like a freaking walking pharmacy! Unreal! All kidding aside, I can honestly say that they work and get me through til the pain and side effects wain and I feel almost normal again.

The one side effect that there is no fix for is the hair loss. I was washing my face and noticed I had a couple of hairs on my hand when I wet my face. I knew they didn’t come from my head. Then it dawned on me. There goes your eyebrows and lashes chick. BUM-MER! So it’s been two weeks since treatment 6 and as of today I have a couple of little short bottom lashes, still a decent amount of top lashes but some gaps. I decided to stop wearing mascara since they are so fragile and it was doing more harm then good. After all, it was just making me feel like I looked better when I put makeup on. I do have fake ones that I may try out. But since I’m so close to the end I may just leave them alone so that in a few weeks they will start growing back. As for my eyebrows, they were pretty thin to begin with so its not like they are easy to draw back on using makeup. In the corners were they are thicker, or should be, I can fill those in a bit more. The hard part is that they are pretty light so finding makeup to match them is a bit tricky. But we’ll see. Good news is my wigs all have bangs so I can just wear them to cover up my forehead and not look like an alien!!!

New Years Eve I came down with this nasty sinus cold that everyone seems to be acquiring. On Wednesday I called the doctors office to see what I could take and if I should be getting a prescription. I went in to see her and she said since I had no fever and judging by my symptoms it was most likely viral. Said to ride it out with mucinex etc. So I have been doing just that.

Today is probably the best I have felt in days. Which brings me to Round 7. Say what?!?!? Holy hell, round 7. I’m literally rounding third base and on the home stretch. I was totally scared I was going to see the doctor today and they would say sorry no treatment because you are still sick. At least I did for a bit. But when I got to the infusion center today for my blood draw, the nurse said that they had a patient earlier who had pretty much had the same cold and her doctor signed off on her treatment. Then I thought about it. This is Dr Tweed we are talking about! As long as my labs come back and they are good, she’s going to say lets do this! And I was totally right! My labs came back and they were great! Slightly better then last time. She was really excited about how well I’m doing and have done throughout Chemo. I can not say enough about her. Truly blessed to have her on my team. My only setback today was that they cornered me off so I was a bit further away from the other patients. And I was asked to not have any visitors for today. It ended up being ok because once again, Benadryl kicked in and this little lady slept! Once again, no issues during my infusion time. Just got home a little bit ago and will probably rest a little more. My only directions from my doc are to watch my cough and congestion. Since I am now hacking stuff up, she informed me that if it gets any worse to call and she’ll put me on antibiotics. Sometimes viral colds will turn bacterial in the form of bronchitis so I should be aware of that. Otherwise, looking good!

For all you followers of our house progress, we had electrical inspections last week, floor tile on first floor installed, and half the kitchen cabinets! Things are moving along now! Super exciting! Looks like the completed project will fall right in line with completing Chemo! Couldn’t be happier. Pictures to follow! 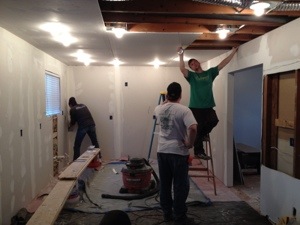 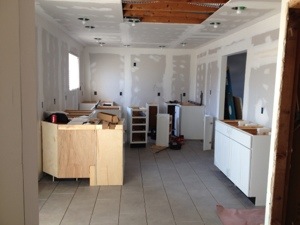 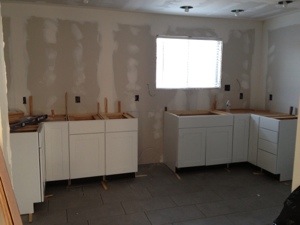 7 thoughts on “Getting Caught Up (or round 6, Christmas, NYE, getting sick and round 7)”